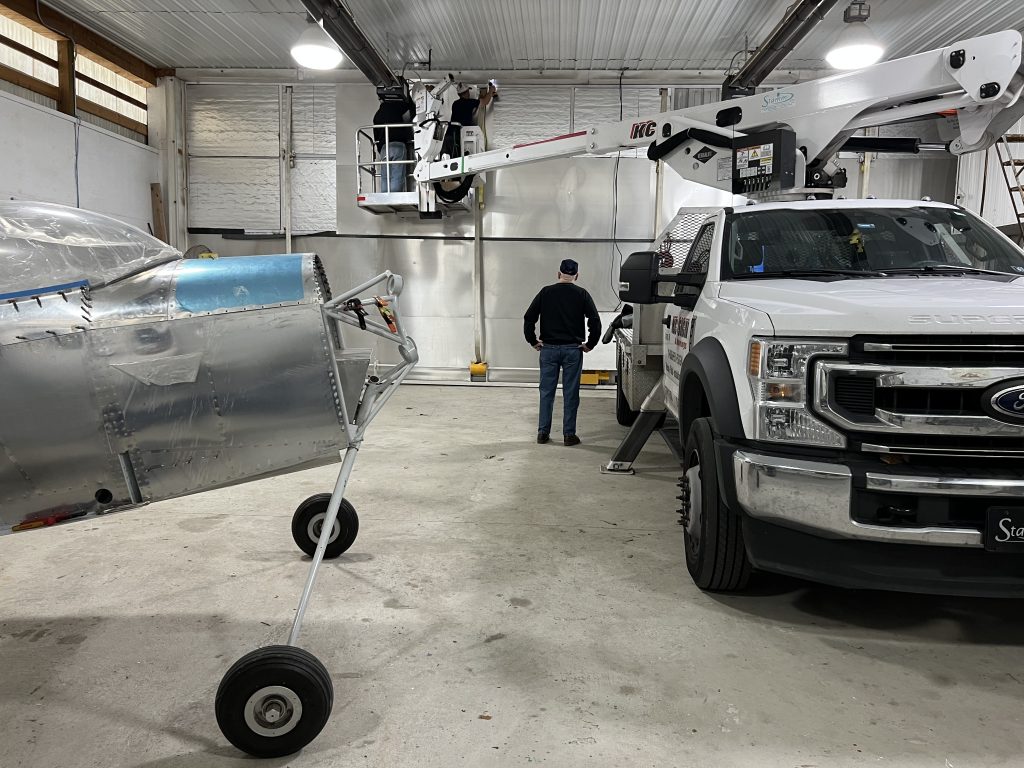 Much progress was accomplished this morning (Saturday 27th) on the list of Hangar maintenance and upgrades we hoped to complete. Rain meant we couldn’t repaint the hangar door exterior framework but with the help of a mobile hoist (thanks Jim Clark!) we began to clad and insulate the door interior.
Then, using the same impressive hoist, the team converted the radiant heaters to better utilize our new natural gas supply.
At the same time, we repositioned and put up new signage for all Fire Extinguishers and First Aid boxes around the hangar and kitchen areas.
The team fitted the new large-screen TV to the wall and tested it – beautiful!
We also began the planning, layout and installation of the new office area worktops and cabinetry in the kitchen.
The volunteer team also fitted a ‘dead-bolt’ to the rear hangar door, to increase security.
We postponed the planned painting of the two new replacement entrance doors in the kitchen area until the spring, and better weather!
A very productive and fun morning, and our collective thanks to the team who contributed to make such progress. The team included: John Leslie, Jeff Geist, Ken Hess, Larry Keating, Ralph Dooley, Dan Gutierrez, Jim Clark, Lee Blazejewski, John Bickhart, Bob Greeley, Dave McKenzie, Frank McDonald, me.

BIG call-out to Jim Clark for the use of the formidable hoist that enabled us to complete so much this morning. Appreciated!

More to do, particularly to get the new kitchen worktops and cabinetry in-place, but with this level of membership engagement we can be confident of a further volunteer team effort to complete the work in keeping our 20+ year-old facility in good condition for all members use.